How to clean your keyboard... using a dishwasher!

Last week I was complaining about the MacBook keyboard. I needed a full keyboard to be able to work, so I asked our IT guys, if there were any external keyboards available, and they pointed me at a cabinet, which had a bunch of old keyboards. OMG! Those keyboards were so dirty, I didn't want even touch them! And it's not just the keys, which were never cleaned. Apparently Apple hardware design is not always that well thought out. Who came up with such a shape, where the outer keyboard body is some kind of an open tray, with the keys inside? Dirt, bread crumbs, hairs, and any small pieces fall down into this tray and stay there between and under the keys and internal keyboard part. And because the tray is transparent, all that dirty stuff is very well visible, which doesn't help.

Well, those were the only keyboards available, so I took one, which at least looked a bit newer under that layer of dirt.

I used to wash a keyboard before, but it was quite time consuming, as I disassembled the keyboard, removed the internal electronic components, washed only the plastic shell with keys, and re-assembled everything back. It looked even more difficult with this Apple keyboard, starting with the screws, which required a small hex screwdriver, and the keys, which construction looked different.

I searched on the Internet and found quite many mentions of the keyboards cleaned in a dishwasher. This sounded like a plan! The keyboard was so dirty and looked so old and abused, that I thought, even if it would die in the process, not many people would regret. On Saturday morning I removed all the clean dishes from our dishwasher, prepared the keyboard by wrapping the cable around and connecting it to one of the USB ports (just so the cable doesn't dangle, and covers at least one USB port), put the keyboard into dishwasher with the keys down, and started a quick wash cycle without any detergent, using just hot water, and with air dry only, without sanitizing (I guess the heated air could melt the plastic).

When the wash cycle was completed, I removed the keyboard, which was full of water, but looked clean. I put it near the heater, not too close so just warm dry air comes to it, and let the keyboard dry over the weekend.

Then was the moment of truth. I connected the washed and dried keyboard to a computer, and it worked! Tested all the keys - no problem at all, and it looks like new! 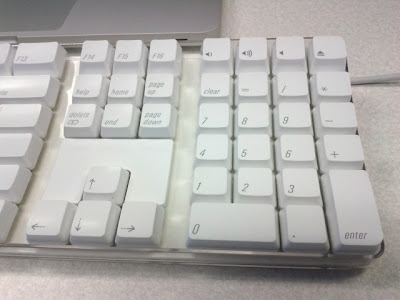