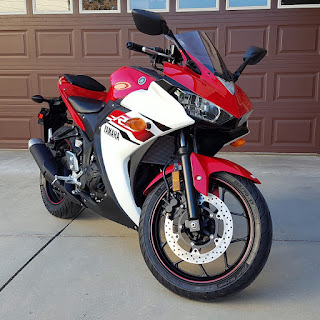 In 2015, 33% of all motorcycle riders involved in fatal crashes were speeding, compared to 19% for passenger car drivers.

Motorcycle riders involved in fatal crashes were 1.3 times more likely than passenger car drivers to have previous license suspensions or revocations (20.6% and 16.2%, respectively).

The reported helmet use rate for alcohol-impaired motorcycle riders killed in traffic crashes was 51% as compared to 65% for those with no alcohol.

Helmet are estimated to be 37-percent effective in preventing fatal injuries to motorcycle riders and 41% for motorcycle passengers. In other words, for every 100 motorcycle riders killed in crashes while not wearing helmets, 37 of them could have been saved had all 100 worn helmets.

40% of the 4,976 motorcyclists killed in motor vehicle traffic crashes were not helmeted, based on known helmet use.

Source: https://crashstats.nhtsa.dot.gov/Api/Public/ViewPublication/812353
Posted by Alex Pakhotin at 1:09 PM No comments:

Posted by Alex Pakhotin at 3:30 PM No comments: