New PC: Why I don't like brand named PCs

I was complaining about limited SATA connections on Dell motherboard.

Turned out I was wrong. Look at this picture - here are the available connectors: 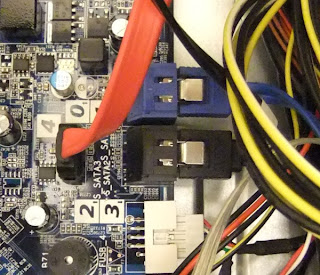 Those black and blue ones at the edge of the board are used for the the HDD and DVD drives, so there was only one available. But when I was checking BIOS setup today, I noticed it lists more SATA slots. I did one more closer inspection, and finally understood what those numbers and text near the SATA ports on the motherboard mean. Those black and blue connectors are actually double ports! Right under the ones, which are visible and have cables connected, there are two more connectors, which are hidden and not noticeable from any possible angle. And even when I found them, it was very difficult to connect the SATA cables there - without seeing and with limited access.

I've never seen the SATA connectors design like this! If I had a manual for the motherboard, I could figure that out earlier, but alas, seems like there is no such manual coming with Dell XPS.

So, finally it looked like I could connect my other HDD. But that was a hasty conclusion. I was still unable to connect the additional drive, because the SATA power cable was not long enough. It was designed to work only for a specific hard drives position in the original XPS case - the distance between the connectors is very short. I could use one cable with three connectors to power two drives, and the second cable, even though it had three more connectors, could only be used either for the DVD drive, or for another hard drive, but not for both of them. Normally the power supplies have at least a couple of molex connectors. Even though they are not used for the HDDs these days, there are adapters for other components, like fans, special motherboards, PCIe cards. But Dell power supply does not have any, so I couldn't even use this way. I need a SATA power splitter.

How many more surprises should I expect from this Dell?!?

Here's a list of annoyances I had to face with this Dell:

The main idea is: all the components of this Dell PC were designed for a specific configuration. The customization/upgrade/replace abilities are extremely limited. This kind of a PC is intended for the users who are not expected to do anything with it. Want to change something? Order another configuration or even another model!

It is not for me for sure. I've never wanted to buy a brand name PC for myself - saw several of such machines, and every one of them used some custom components, which were difficult to customize or upgrade. This is the first time when I had to get a brand name PC, and it will be the last one!
Posted by Alex Pakhotin at 11:45 PM