As I mentioned in the previous post, the Arctic Cooling Freezer 13 Pro cooler didn't fit into Dell XPS case. What to do? I didn't like the option of exchanging it for a smaller one, as smaller fan would be louder, as its smaller fan needs to rotate on the higher RPM, which eliminates the main goal of making my PC quiet. So I decided to replace the case. I didn't like the XPS 9100 case anyway - it was not designed with silence in mind. Nothing was done to make it quieter - no insulation, the hard drives, DVD drive, and fans are screwed directly to the case, without any vibration dampers. The only good thing - it had 120 mm case fan, which wasn't too loud, rotating at not very high RPM.

I did a lot of research on the quiet PC cases, and selected one, which got a good review on Silent PC Review, and was frequently mentioned in the reviews of other cases, as one of the best - Antec P183: 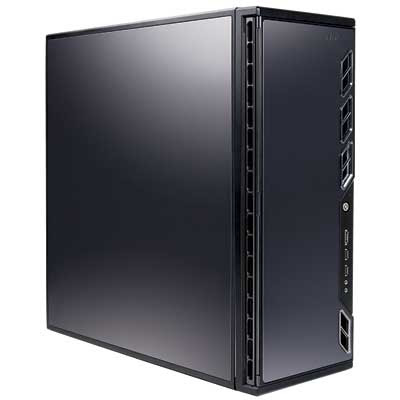 The main silencing features of this case are: three-layer, sound-deadening side panels and front door; HDD mounting with special cages and silicon anti-vibration grommets; a separate chamber for the power supply in the bottom of the case also helps to reduce noise.

This case was in stock at A-Power, so I bought it from there. I spent the whole evening moving all Dell components from the XPS to this new case. It is slightly bigger than XPS 9100, and with the top fan removed, the Arctic Cooling Freezer 13 Pro fits perfectly.

Of course it didn't go as smooth as I planned. When I installed all the parts, connected everything, and powered it up, the computer didn't want to boot. It kept complaining about the front USB not connected. It also wanted a case fan, so I connected one, and the error message disappeared. But that front USB was painful! First I tried to connect the case front panel - the error was still there on the next boot. Then I got a card reader with ports USB from the old computer, connected that panel, switched on - the same error message. Finally I just disassembled the XPS front panel, removed the card reader with USB ports from there, connected the cables to the motherboard, and that helped! The computer had finally booted. Apparently those original USB ports from the XPS are special. It looks like they have some capacitors, which are probably used to detect the connection, so the motherboard only works with the original USB ports panel!

I didn't really need those ports and the card reader, but didn't have a choice - they had to be connected for the computer to boot, so I put the USB panel inside the case (just used some wires to keep it in place), and connected a couple of USB extenders, so I could at least use those ports. I also found a place for the card reader: could put it into 5" mounts in the front of the case. It doesn't look very aesthetically pleasing, as it's supposed to be covered by the cool shiny semi-transparent panel of the XPS case, and that panel is not detachable. But at least it is connected properly, so the computer boots, and the reader is even accessible, so I could use it to read from the SD cards used in our cameras.

Arctic Cooling Freezer 13 Pro with heat pipes and big 120mm fan works much better than the stock Intel cooler. Here are the temperatures:


And most importantly - the computer is now noticeably quieter than before! It is a combination of several things:
It is not dead silent yet, as there are still 5 working fans inside, but the noise they produce is very low. During the day with all the normal sounds around I can barely hear it. And even in the night it's not very noticeable.
I'm happy! :)
Posted by Alex Pakhotin at 5:07 PM